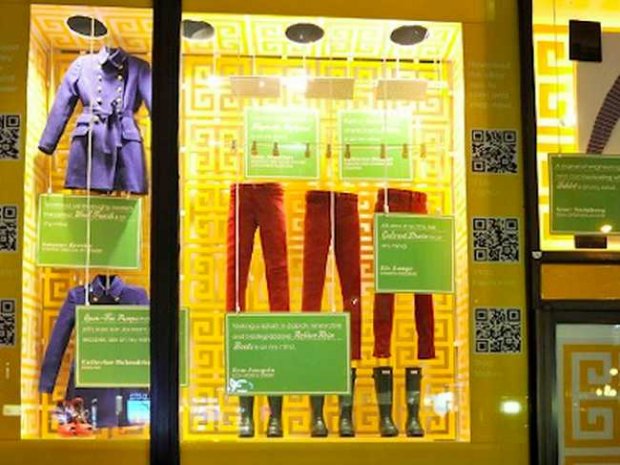 ebay is launching virtual stores called "shoppable windows" this month that the e-commerce company hopes will help retailers generate more sales from their existing physical store networks. The first four of these screens will open from June 8 through July 7 in busy parts of New York City, such as the lower east side and Soho. They will sell 30 items from Kate Spade Saturday, a new fashion brand launched this year by apparel retailer Fifth & Pacific Companies Inc. ebay set up a window display in New York City in late 2011, but those storefronts did not let shoppers order products on the screen. The new screens measure about 9 feet across and 2 feet (0.6 meter) high and will appear on the front windows of closed stores. Shoppers will be able to touch the screens to order and have products delivered to them within an hour via courier. Payment will be accepted by the couriers through PayPal Here, a mobile payment service developed by eBay. This is the latest effort by ebay to work more closely with large retailers that are looking to reach more online and mobile shoppers. The company has attracted some large retailers, such as Target Corp, to its online marketplace, while developing mobile shopping technology for other retailers such as Macy's Inc. ebay's "shoppable windows" are an extension of the shift to mobile shopping, according to Steve Yankovich, head of the company's Innovation and New Ventures group, which developed the technology. "This extends the boundary of the store. Suddenly the physical store, by virtue of online technology, extends to any space that's interesting to use," Yankovich said. For Fifth & Pacific, the windows will help launch its new Kate Spade Saturday brand without opening new physical stores, at least initially, according to Chief Executive William McComb. However, the company also plans to use the technology in existing stores of its other brands, such as Juicy Couture and Kate Spade New York, he added. "This gives us the ability to produce more from our retail space," McComb said. "My nickname for it is the Wall as a Mall." McComb said he is considering putting shoppable windows in small Juicy Couture stores that will offer about 200 different shoes to buy. The company may also use the windows in Kate Spade New York stores to sell home furnishings, bedding, linens and towels. "We would never be able to fit all those products in a store in the traditional way," McComb said. "These things would typically require an extra 10,000 square feet of store space. But through partnerships like this eBay one we could do this through stores that are 2,000 square feet."