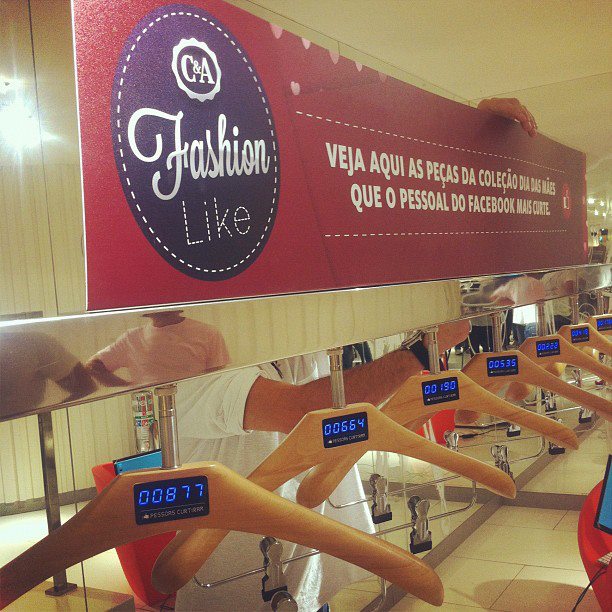 Featured at C&A in Brazil, a system called FashionLike has been implemented. Whenever sometime likes a clothing item online at C&amp, a thumbs-up is tallied on a screen embedded in clothes hangers on the store's physical racks. It is meant to help customers with purchasing decisions. If they are unsure of one item, they can see how many people online think the product is a good buy. Shoppers can then consider that input as they browse the store aisles. Do you take the popular shirt with more than 1,000 likes, or go under-the-radar and pick the one with just a couple hundred? C&A is not the first to marry digital and real life in the world of fashion marketing. A Stussy campaign last month promised that a model dressed for winter warmth would shed clothing layers according to how many likes the campaign generated on Facebook. Others have sought to crowd-source design feedback from the masses online. And Maybelline recently hired the star of the popular "Sh*t Fashion Girls Say" parody video for a stint as the brand's new spokesmodel. As many have pointed out, however, there is one major potential stumbling block with C&A's FashionLike: What if someone just walked into the store and switched items between hangers? But stumbling blocks or not, C&A's effort is an interesting intertwining of Facebook and the real world — a trend that will likely become more and more common.