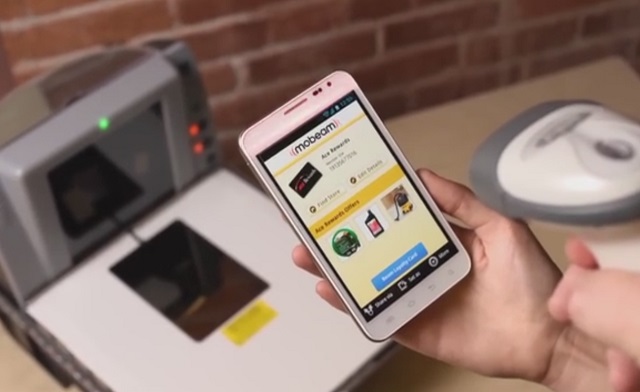 Mobeam have introduced a patented beaming technology which allows laser scanners in stores to scan mobile phone screens. Consumers can select, manage and redeem these eCoupons when they beam their store loyalty card from the OmniBeam app on their at over 25,000 grocery and drug stores throughout the US. Mobeam's beaming technology solves the key problem that has limited the progress of mobile couponing, that is that widely retail laser scanners are often unable to scan a barcode presented on a smartphone screen. Mobeam overcomes this obstacle without requiring retailers to invest in new scanner hardware or system upgrades. Mobeam converts barcodes into beams of light that can be read by the tens of millions of laser scanners in use today by retailers worldwide. Mobeam have announced that the Samsung Galaxy S4 smartphone would be the world's first mobile device that integrates mobeam's light based communications (LBC) technology so S4 handsets can beam traditional 1-D barcodes. Other handsets are expected to feature LBC. "We are extremely excited that we can help customers save time and money by putting this revolutionary technology right in the palm of every customer's hands as their life companion," said mobeam President and CEO, Kang M. Lee. "With the OmniBeam app customers will be able to use their phones to easily scan the barcodes of their loyalty cards and redeem grocery coupons at thousands of retail outlets all across the country. Barcodes are universal and with the OmniBeam app, retailers don't need to upgrade their existing POS systems to make barcodes mobile."