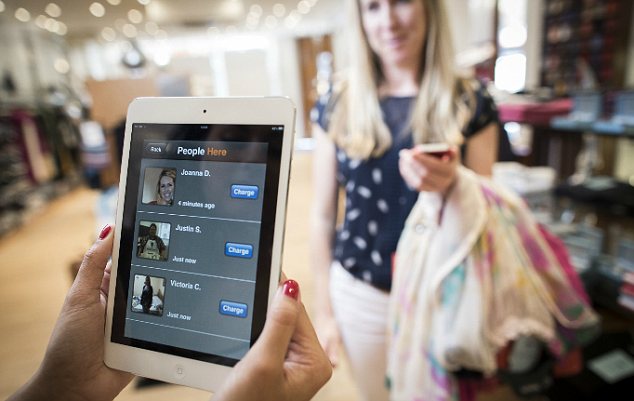 Shops in Richmond, South West London, are among the first in the country to have adopted the PayPal app which allows shoppers to pay for their purchases just by checking in a chosen shop with their smartphones. The 'pay by mobile' app was introduced in the UK three years ago. Retailers in Richmond who have adopted the app said it was 'efficient' and the 'quickest' transaction through the till. Richard Garcia, owner and proprietor of Cook and Garcia cafe on The Quadrant in Richmond, said: ‘We've been using PayPal's check-in service within the business for several months, and have found it really efficient. ‘Customers don't have to worry about having cards, cash or change, just their phones. It is the quickest transaction through the till, which means less queues and we never have to turn down a sale, both of which are great for business.’ Another Richmond retailer, Ismail Ahmed of The Farmery frozen yogurt store, said: ‘Lots of our customers have a mobile phone and are familiar with using apps on their phones. What's better is that we didn't even have to change anything about the way we run our business - we're still using the same tills and system, including iPads and iPhones to operate the technology. ‘All the customer has to do is check in on their phone, we see them on our system and we can just charge them. They can even check in before they get to the shop for their frozen yoghurt.’