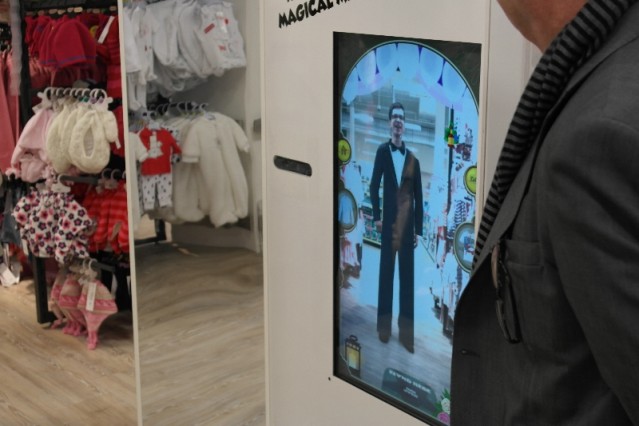 Tesco’s F&F clothing range features over 7000 items, but is often overlooked by shoppers looking for something more exciting. Meanwhile, a recent survey by Cisco has found that eight out of ten UK consumers use digital sources to help them decide what to buy, and 71 percent want to access digital content in-store. According to Tesco’s head of online development operations Situl Thrakrar, what a modern shopper needs is something “to aid the experience” in the store. What would serve this purpose better than some technological treats? So the company has attempted to add online features to its in-store displays, specifically those with F&F clothing. Chief among the wonders is the ‘magic mirror’ – a giant screen with a built-in camera which captures the customer’s body dimensions and position. The ‘mirror’ then superimposes clothing over the customer’s on-screen image. The whole process is controlled by hand gestures, which are interpreted by a Kinect device. Trying on virtual clothes is more fun than it sounds, and it’s little wonder Tesco has decided to adapt the system for the kids. The Woolwich store mirror was created by C In Store and it is fully supported by Cisco infrastructure. It is smaller than the one at John Lewis (which makes sense, since it’s for the little ones), and the interface has been redesigned to feature fairies and Buzz Lightyear. The new magic mirror is full of surprises. On selecting a knight’s fancy dress costume, a red dragon swoops across the screen.