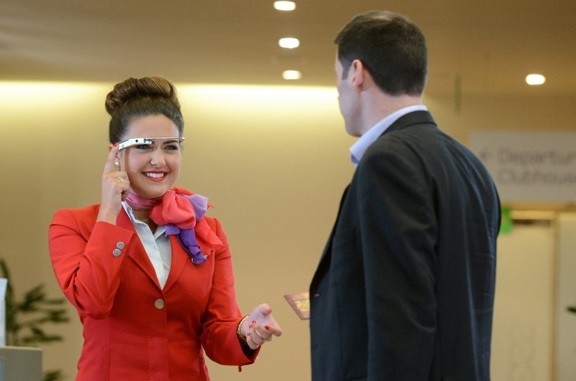 In the last 20 years, retail has changed more than at any other time in history. The innovation in internet powered personal devices has enabled customers to shop differently - today shopping has never been more convenient. An online ‘connected’ customer can choose to shop from wherever they want using a wide selection of devices which can be broadly categorised as smartphone, tablet and personal computer. Now there is a new classification of device emerging – the wearable.

Wearable technology originates as far back is 1980 when Steve Mann, a researcher at MIT, strapped a cathode ray-tube to his head demonstrating that you could wear technology. Though far too heavy for a real practical use, the applications of the time did demonstrate that there could be practical uses for wearable technology in years to come. The first commercially available wearable devices were watches and the Casio Databank watch from the late 1980s was a good example of this. The problem was it just wasn’t fashionable or useful enough for the consumer. In fact none of the other incarnations of wearable technology born in the 1980s really caught on. The technology was too big or too limited in functionality. 20+ years on and the wearable is having a re-birth. The re-birth has been brought to the mainstream by continued investment in the miniaturisation of technology that has been fuelling advancements in mobile technology so lucrative to technology firms today. Wearable technology could almost be seen as a by-product. Computer chips going into mobile devices today have now become so small and so power efficient that it is now practical to ‘wear’ technology on your body. We are at the stage with wearable technology that the appliances are nearly ready for mass-market. On a similar parallel to the early days of tablet technology, we’re asking ourselves 'what would I really want to do with one of those?' meanwhile a wide spectrum of technology based firms invest millions in research and development in the search to find the ‘killer app’ in a number of vertical markets.

The Classifications & The Functions

Before we speculate on the kind of impact wearable technology will have on the retail shopper, let’s classify those wearable device types and the way we expect these devices to be used: -

Likely applications for the shopper

Fitness and healthcare applications have emerged as the front-runners in the adoption of wearable technology and as yet retail hasn’t proven a practical use so let us speculate on what kind of impact wearable technology will have on the retail shopper. Pay with watch Like the smartphone, the watch will also be used as a payment device. Contactless card payment is gaining momentum - customers like it because it removes some of the friction from the payment process and retailers like it because it helps reduce queue sizes. It is restricted today because the customer can’t purchase baskets above a certain value - the customer doesn’t have to verify their identity with a PIN so if a card were lost or stolen, a person other than the cardholder could use it With Apple Watch, it is different; the customer can use the watch as contactless but is able to verify their identity only when the watch is put on hence removing the constraint on basket size. With ApplePay, Apple will be the pace setters when it comes to payment by watch but expect others to follow. Taking it further, what retailers really want is to track customer behaviour across channels. Is wearable and mobile payment the instrument to enable this? Shopping with digital eyewear Browsing online has one major advantage over browsing in store – there is normally more information about the product than is written on the packaging and that includes “social proof” data like ratings and reviews. What would it be like if you could see all this information when in stores yet also benefit from being able to touch, feel and try-on a product? It would be dependent on image recognition maturing further as well as digital eyewear being adopted by the majority. Viewing a product in 3D with digital eyewear Digital hologram technology has been maturing to a point where the big technology companies are now starting to invest. The recent announcement from Microsoft on it’s Hololens product suggests that we might very soon have technology in our hands which would allow for a customer to view, rotate and walk around a virtual product in 3D before purchasing. Imagine also being able to stand in your living room and visualise what your sofa you have seen online might look like in your home. For all this to happen, retailers would need to have found a cost effective way of capturing products in 3D and we’d need a holographic technology / eyewear to have been adopted by the majority. Buying the dream with virtual reality headwear The world stood up and took notice when Facebook acquired the virtual-reality technology company Oculus Rift for close to $2 billion. The question is, will virtual reality find a killer app outside of gaming? If it does and these devices end up in most households then you could envisage walking around a holiday resort or test-driving a car you have customised online from the comfort of your home or in a store 'theatre'.

Likely applications for the retailer

Many predict that one of the main beneficiaries of wearable technologies will be businesses who perform task based activities whilst being in an environment which requires them to be mobile. Personalised service with digital eyewear Virgin Atlantic has been trialling Google Glass for their premium Upper Class customers who demand that higher level of service. Here assistants could greet you as you arrive at the airport, provide details of your flight then proceed to ask you whether you’d like your usual vodka and tonic, favourite meal and a copy of the Daily Telegraph. This could be done with the customer looking you in the eye , giving you that personal service rather than focussing on a screen. Bring this to the store and imagine a store assistant who is able to provide you with a highly personalised shopping experience where they suggest products to you based on your past purchase history or what others like you have also purchased. If store assistants were able to answer every question about a product through information projected into their eyewear then it could make for greater conversion and higher basket sizes in store. For this to become a reality the eyewear would need last an entire shift without the battery running out. Personalisation in store has a different hurdle to clear – retailers need to find a way to track your behaviour in a store environment similar to the way they do online; for that to happen the shopper first needs a good reason to identify themselves and volunteer to be tracked. Pick, pack & dispatch and other task driven activities with digital eyewear In a place that always benefits from productivity improvements, imagine a warehouse worker using digital eyewear to locate items within the warehouse to pack into a parcel ready for dispatch. Digital eyewear would enable the worker to always be focussed on the task in hand and not being slowed down by constantly looking down as they interact with a handheld device. Like warehouses, large store environments that are also very task driven could benefit from digital eyewear for a range of activities from receiving inbound deliveries to replenishing shelves. With the previous example, eyewear would need to last an entire shift before it could be adopted by businesses. An aspirational video produced by SAP shows there at least one big software vendor thinking digital eyewear could be used in this way.

While wearable technology is yet to become an everyday retail reality, it seems there are plenty of future opportunities for it to become widely used. The key, as with digital in retail more widely, is to develop uses that make shopping more easy and more convenient for consumers as well as for the staff behind the scenes.