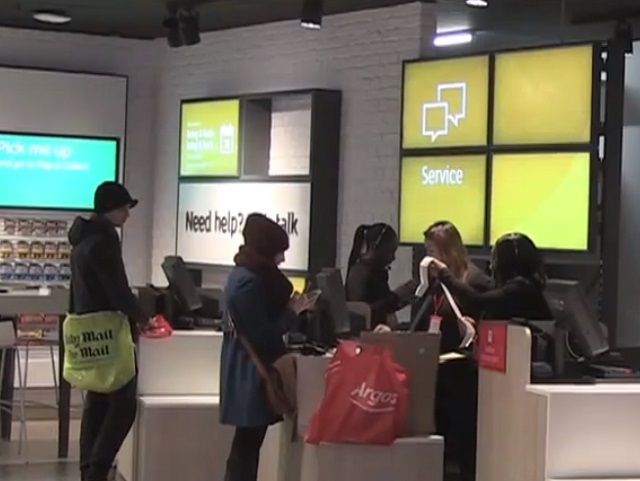 Waiting in the queues at Argos to collect your numbered order used to be one of the traditions of the UK catalogue retailer, but that experience looks to be a thing of the past after the catalogue retailer pledged to serve customers within 60 seconds as part of a digital revolution in it stores. Argos is introducing a “fast track” service that it says will allow customers who have ordered their products online to collect them from a store within sixty seconds of arriving. Argos is also launching “pay and collect” points, meaning the end for its long collection counters that involved customers waiting for their number to be called by shop assistants. Argos unveiled its new-look “digital concept store” at Old Street at the end of last year and has developed six of the stores, including four in London, a store in Colchester, Essex, and one in Dunfermline, Scotland. In conjunction with the launch of the new stores, Argos is also following a recent trend and trialling despatching goods from around 50 stores including the four London digital concept stores, promising immediate, same day or next day fulfilment on a range of 20,000 products. John Walden, the managing director of Argos, said that 90% of the company’s sales still involve a customer using a store at some point. A third of Argos sales involve a customer ordering online and then collecting in store. “We are early in our ambitious plan to transform Argos into a digital retail leader. We are seeking to reposition our stores to support a digital future, in which digital channels are the primary interface for customers, but stores continue to be critically important as a national network for product collection and a local presence for local colleagues to provide customer service.” Walden said: “The new digital concept stores enable us to trial with customers several important features of what we believe a store should offer in a digital future, such as a modern and universally-appealing environment, a fast and digitally-enabled shopping journey, market-leading fulfillment options for an increasing range of products and friendly colleagues that provide a human touch in an otherwise impersonal digital transaction. “We anticipate that our digital concept stores, and the several features in trial will provide valuable in instructing any future changes we may make across to our store estate to further the Argos transformation.”