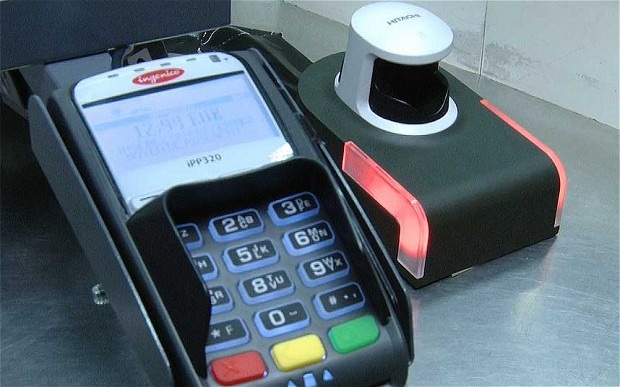 In a-six month trial, more than 900 customers of supermarket chain Auchan and DIY store Leroy Merlin had the chance to pay for their shopping using their fingerprints. The pilot took place between October 2012 and March 2013 in Villeneuve-d'Ascq and Angoulême near Lille in northern France. The participants carried a payment card that stored their fingerprint data and a case that was used to communicate with the payment terminal. When they went to pay, shoppers just placed a finger on the reader. The reader read either their fingerprints or finger veins. Following the trial 94% of participants said they were willing to use the payment option for all their in-store purchases. Two biometric technologies were tested during this six-month pilot: digital fingerprints in Angoulême and finger vein patterns in Villeneuve d'Ascq. Almost 5,000 transactions took place during the trial, which product developers Natural Security, part of Banque Accord, said was a high adoption rate. Cedric Hozanne, chief executive of Natural Security, said "This the first time that data is kept exclusively on a smartcard that remains in the user’s possession and is not traceable.". Ron Kalifa, deputy chairman of WorldPay, said: "It's interesting to see the public considering options such as biometric payments, a science that they may have seen in sci-fi films or on TV, which suggests familiarity and visibility of new payment technologies is crucial in moving usage from tech savvy enthusiasts to the wider public." At the end of the trial Cedric went on to say "We'll be using the results to feed into future developments, but undoubtedly it's been a success. Consumers are ready for this new type of payment method." The scheme involved banks Banque Accord, BNP Paribas, Crédit Agricole and Crédit Mutuel Arkéa, as well as retailers. A recent survey of 2,159 shoppers by payments processing firm WorldPay also found a strong interest in biometric payment methods. 49% of those surveyed said they would like to have biometric payments, such as fingerprint, palm or iris scanners. Just 30% said they would like to use contactless smartphone payments and 23pc wanted to use text message payments. Cedric commented: "Natural Security's approach is designed to protect privacy and personal data: the data and applications used for authentication are stored on a personal device (e.g. smart card, SD card) and remain solely under the user's control. This limits the risk of data misuse and theft. We fully expect that the results of the trial will be positive and we look forward to replicating the success internationally.” Lowes foods were one of the first retailers to play with biometric payments using the BioPay solution back in 2005.