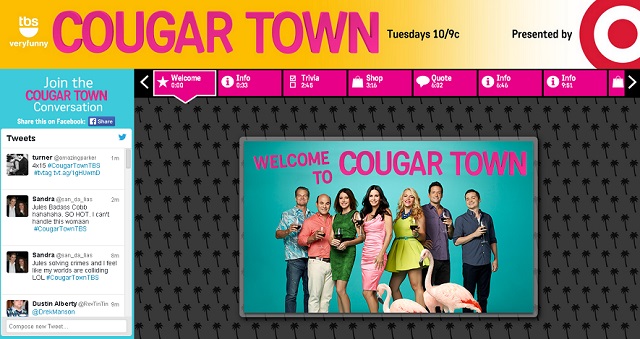 It is believed that around 40% of tablet use is done on the sofa whilst in front of the TV which is why Target have created another online TV show this time called Cougar Town. At the beginning of the show, viewers will be encouraged to visit the site on PC, smartphone or tablet, and click to sync with the cable version. That begins a concurrent web version of the episode playing on the consumer’s secondary device, or “second screen.” The web version of the show includes “hotspots” over each featured item from Target, designated by a red plus sign, the spokeswoman says. When a consumer clicks on a hotspot, the show pauses on the second screen and an overlay pops up for her to purchase that item without leaving the page. During the episode, ShopCougarTown.com will also aggregate social content with the hashtag #ShopCougarTown, the spokeswoman says. The site also includes video clips and behind-the-scenes videos from the show, with the items in those videos displayed beneath and linking to Target.com. “Our research showed that ‘Cougar Town’’s viewers love their homes and design, and they love shopping at Target, so we felt the show was the right fit to bring Target products to life in a new way for our guests,” the spokeswoman says. In fact, she says, Target last year ran a promotion with “Cougar Town” in which the characters Bobby and Travis, played by Brian Van Holt and Dan Byrd, respectively, took a “vacation” in a Target store. That promotion was not shoppable. Tonight’s TV campaign is not Target’s first take on connecting shopping to videos. This past fall, Target ran a back-to-school campaign featuring Internet celebrities in shoppable YouTube videos. And, in the fall of 2012, the retailer shot its own short film for the web, a romantic comedy called “Falling for You,” which consumers could click on to purchase. That was an extension of its 2012 fall style campaign, and Target developed the show and web site itself, the spokeswoman says.