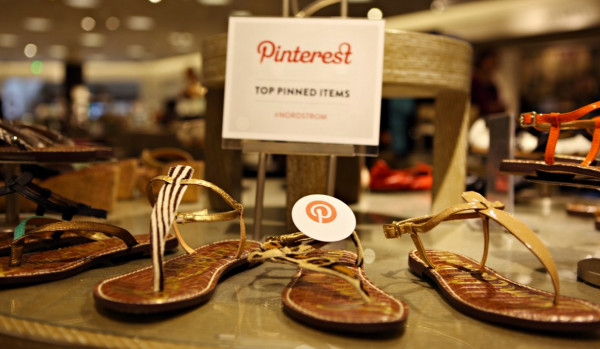 The US retailer Nordstrom is testing showcasing the most popular items on Pinterest in various departments of its physical stores. The retailer which has 4.5 million users on the social network is the first to test this approach. Popular items on Pinterest are displayed with a red tag identifying them as popular. Bryan Galipeau, social media manager at Nordstrom, told Business Insider it "makes sense" for the retailer to incorporate social feedback into the shopping experience. "What we're doing here is taking the lead from the customer," Galipeau said. "We've seen really rapid growth on Pinterest, so what's relevant to our Pinterest followers could be interesting to other shoppers as well." Nordstrom has been working with Pinterest for years. The retailer has a "Pin" button for every item on its website. It also showcases popular Pinterest items on its e-commerce site. But Galipeau said this test takes the engagement to a whole new level. "Our intuition is that this test might translate digital insight into a real experience," Galipeau said. "It's compelling to consider how an online community could affect merchandising decisions in a physical store." The retailer also created an in-store app for salespeople that matches up popular Pinterest items with current inventory for a department on a store-by-store basis. Nordstrom started testing displaying Pinterest items in its Seattle stores in March. Encouraged by those results, it began rolling out tests at other stores around the US. Galipeau said that there's no rhyme or reason to what items blow up on Pinterest. "It really runs the gamut in terms of interesting and surprising things," he said. "A cool aspect of Pinterest is that popular items are totally democratic." "We're really viewing this as an interesting opportunity to understand if this way of promoting products can help drive results," Galipeau said. "We can see how retail can leverage this data category."